Email ThisBlogThis!Share to TwitterShare to FacebookShare to Pinterest
Labels: Heart too Hard

Dear I,
I'm taking a day off today, in memory of Sayang, N's teen cat who was put to sleep at about 1:20am after the xrays showed that she was paralysed due to a spinal cord injury.
I had a pleasant day yesterday and day before - ferry cruise to Liberty and Ellis islands, caught up with Mak P at Macy's on 34th St, slept over her place, then shopped for grocery and cooked dinner for N since she was fasting.
After dessert, she decided to show me Sayang, who spent most of her time in N's bedroom; naturally, she was afraid of me and hid under the dining table, jumped on the other two window ledges before she jumped on the ledge of the opened window, out into the airwell and three storeys down to the landing in the basement.
We went down and found her dragging her hind legs and unable to stand, took her to the emergency vet at downtown Brooklyn and cried our eyes out while waiting for the xray results and told of the options - a surgery that would cost USD5-6k but will not guarantee recovery or put her down and end her misery.
I know this is the umpteenth time I witnessed a kitty pass away - from Brownie to Elsa to Whitey to Patch but this is the first time I saw a cat being 'put down' and finally understood the meaning.
One minute she was responding to N's touch - narrowing her eyes, turning her cheeks and raising her chin - and the next minute her head was down, her soul had flown, her body stiff, wrapped in her favourite red blanket and taken away by the nurse to be cremated and buried.
N found her as a stray when she was about two months old in June 2008 - an exotic French breed with velvety dark grey coat and yellow eyes.
She hardly mewed or whimpered, even after the tragic fall, throughout the bumpy 15 minutes taxi ride downtown and the heartbreaking final moments - such a loyal and stoic character, such a short and cloistered life.
Salam, Sayang, hope you are happier now than you were before!
Posted by BaitiBadarudin at 8/03/2009 11:48:00 PM No comments: 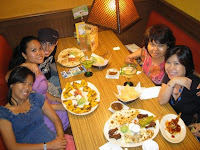 Dear I,
Yesterday, Y and I started our day at mid-day, so we didn't get to cover much of NYC's attractions.
Plus, I'm trying to apply for a job here so I spent some time surfing for vacancies.
I'm getting used to the subway rides and crowds - both the underbelly of the boroughs as well as the well-heeled Madison and Park Avs people.
We walked along Madison, Fifth and Park Avs to the Trump Tower, the Apple Center and Columbus Circle in the evening. Trump Tower was strangely deserted, unlike the Apple Center where you can see people of every age group and skin colour congregate. The focal points at Columbus Circle are the fountain and Whole Foods - you know how crazy I am about advocating organic food and stuff! Finally, I got to taste the no-bacon clam chowder and the in-season cherries are really yummy and succulent. You will surely fall in love with the store too, I bet.
InsyaAllah, later today I'll take advantage of the free entrance at MOMA from 4-8PM and catch a free concert at Central Park.
Sorry about the pixs - will post latest this weekend, salam.
Update: Joined the Friday eve crowd at the Target-sponsored free entry into MOMA and scrutinised Ensor's work, then off to Times Sq with Y, S, M & A to have dinner at a Tex-Mex restaurant and watched Kathrine Heigel in The Ugly Truth.
Posted by BaitiBadarudin at 7/31/2009 12:19:00 PM 1 comment:

A Bite of Big Apple

Dear I,
Today I followed Y to her office in midtown Manhattan - E 56th St on Lex Av to be precise. The subway ride from Brooklyn to the city was worse than the LRT or komuter in the Klang Valley - most Malaysians would have complained about the dirt and stench long ago. In any case, I was able to appreciate and absorb the sights and sounds far better this time around than the last time when I had to either push you in your stroller or hug Y close to my heart in her carry-on.
In fact, I managed to get acquainted with most of the main buildings, shops and cafes from 56th to 59th St along Lex Ave within several hours, inspite of the intermittent summer showers and thunder storms. Citibank around the corner, Chrysler Building in the distance, Bloomingdale's like a siren luring compulsive shoppers via it window displays straight to its revolving doors; Gap, Banana Republic, Victoria's Secret, Oxford Cafe, Fusia - you'll find yourself drowned in a sea of consumer bliss.
In the evening, we went to Webster's Hall to watch V, or her glam stage name Zee Avi, perform the opening act with numbers from her new CD. I must admit that I felt very proud that this diminutive Sarawakian gal could wow the giant New Yorkers with her sensous guitar moves and lilting voice.
I hope to go to Bryant or Central Park tomorrow if it doesn't rain. There's something about being here NYC that made me blog again. Sure, I had planned on doing so many things - like learning indigo dying and other traditional crafts - when I arrived in Nizwa late January but only managed to get to know the locals in my neighborhood and the places that I visited such as Sohar and Sur.
Will post pixs soon, til then u take care!
Posted by BaitiBadarudin at 7/30/2009 12:03:00 PM No comments:

Are you going to San Francisco? (Be sure to wear some flowers in your hair) 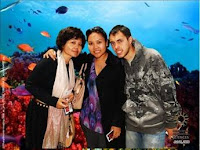