"On course and found horizon"
I’ve been meaning to write about an unpleasant exchange with yet another 24 year old for quite sometime but was searching for the right words so as not to sound ‘illiberal’.
The few times that I shared the painful experience of losing my kampong due to political intrigues, I was rebuked for being ‘emotional’ or ‘a Drama Queen’.
So, I assured myself that the ‘hijrah’ was indeed a blessing in disguise – that I may not have managed to secure a place at the university, pursued a career in the academy, traveled the world and lived in upper middle class residential areas, had my family not moved to Kuala Lumpur.
Though there were times when I entertained thoughts of finally settling in Jeddah, I often asked myself: “Will I actually uproot and migrate once again, if the circumstances are intolerable?”
And WA, on that unforgettable balmy evening by the poolside, seemed to have just the answer for me: “Well, everyone has their 'victim story'; I have my share of loss too"
(She meant her father to a 'Malay diva', so her mother decided to remarry a non-Malay. I didn't bother to tell her that I lost mine to a 'gadis setiausaha'.)
"But you know, you forgive, let go and move on.”
“Try telling that to the Palestinians,” I countered her blithe statement.
“Perhaps they should also learn to forgive, let go and move on,” she was so confident that the mantra (which she paid for almost RM 3,000.00 at a ‘leadership’ program to have it drummed into her head) would work for anyone, at any given situation.
And as if to drive home her point, she looked straight into my eyes and added, “All you need is love in your heart to change the world.”
“That’s what I thought too when I was 19 until experience taught me otherwise,” I uttered to her, as much to myself.
“Well, that was your experience,” she retorted.
I restrained myself from reacting to her last remark, got up and paid for her meal.
I checked myself at the counter: Should I be delighted that she's magnanimous or should I be upset with her parents for not inculcating a sense of political consciousness?
Incidentally, earlier that very day, I had been part of an audience to an impassioned plea by a courteous young man, Feris Omar, the President of ProWaris, on the “20 DEMANDS ON SOUTH JOHORE ECONOMIC REGION”.
Would young, urban and upper middle class Malays like WA be grateful for his struggle?
Or would she be apologizing profusely for his ‘parochial’ sentiments?
I recalled the time when WA and ND were facilitating the multicultural holiday camp with 9-12 year olds from different ethnic groups - how they would chide the Malay girls for using a 'politically incorrect' term to taunt the Indian boys and for being reluctant to mingle with the Chinese vernacular school kids.
"It's ok if they don't want to learn or speak Malay," she said.
I was glad that they were not biased towards their own ethnic group but I was disturbed when they only chastised and criticized the Malay kids. In fact, there seems to be a compulsion to apologize for being a Malay, if not outright embarrassment at being one.
To be continued.
Posted by BaitiBadarudin at 8/20/2007 05:05:00 PM 3 comments: 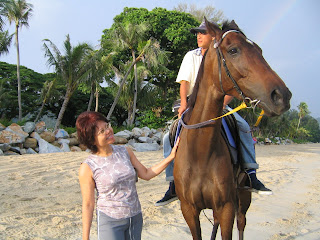 Email ThisBlogThis!Share to TwitterShare to FacebookShare to Pinterest
Labels: off course

Courage is reckoned the greatest of all virtues; because, unless a man has that virtue, he has no security for preserving any other. ~Samuel Johnson (Thank you, Frank Lynch.)
Courage is not the absence of fear, but rather the judgement that something else is more important than fear. ~Ambrose Redmoon
Every man has his own courage, and is betrayed because he seeks in himself the courage of other persons. ~Ralph Waldo Emerson
Courage is what it takes to stand up and speak; courage is also what it takes to sit down and listen. ~Winston Churchill
Courage doesn't always roar. Sometimes courage is the little voice at the end of the day that says I'll try again tomorrow. ~Mary Anne Radmacher*
It is curious that physical courage should be so common in the world and moral courage so rare. ~Mark Twain
People are made of flesh and blood and a miracle fibre called courage. ~Mignon McLaughlin, The Neurotic's Notebook, 1960
*This one is definitely ME!
Posted by BaitiBadarudin at 8/13/2007 07:07:00 PM No comments: