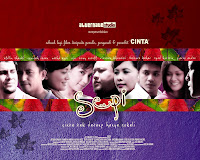 Another product from Kabir Bhatia but with a slightly different 'take' on life, love and loneliness.
Although not as riveting as Cinta, Sepi's plot has its own twists and turns that made the audience sit up and made sense of some of its scenes.
In a nutshell, it is a narrative of three people's lives that intersected at one fateful moment and unravelled from then on.
Adam, a chef, realised that he should marry the woman he loves rather than settle for the one who loves him; Sufi, a shoe maker, ran from the memories that haunted him to a destiny denied; and Imaan, a playwright, woke from a coma to bid farewell to her past and greet her future.
Syed Hussein as Ean was convincing as the persistent suitor to Baizura Kahar's feisty Imaan while Pierre Andre's Khalif was a self-effacing 'phantom' who was jealous of her new relationship yet not bold enough to stake his claim.
Muhammad Riefqie's Ashraff was credible as a grieving yet discerning child.
http://www.sepithemovie.com/
Posted by BaitiBadarudin at 6/30/2008 11:53:00 AM

I have not watched Sepi.

But I watched Cinta and I thought it was good - easily the best post-P.Ramlee era Malay film.

BTW, I am related to you! Nice blog!

Alamak, should have kept that nick and stayed in the closet. Anyways, thanks for leaving a comment and hope u guys are doing fine!